It's always nice to see a random act of kindness.  A photo that has gone viral shows two caring strangers who provide shelter for a dog stuck in the rain in Dover, England.  What a feel good story!


Posted by Pitter Patter Paws at 8:32 AM No comments:

All pet parents know that a cancer diagnosis for a pet can be one of the hardest things to hear from a vet.  But Lily beat the odds! Click on the link to see her reaction that is making her a viral star. Posted by Pitter Patter Paws at 10:08 AM No comments:

Fellow dog lovers and future pet parents, ever wondered how much your pet is costing you? Unless you keep an excel spreadsheet month by month, then probably not.  But look no farther! And although these costs may be a bit high (or lower, depending on your pets needs), there is not cost when it comes to the love of a pet.

This is What it Really Costs to Own a Dog Posted by Pitter Patter Paws at 11:36 AM No comments:

Khalessi is yet another wonderful example of how forgiving dogs can be.  Even after someone almost left her for dead, she is recovering and has never lost her beautiful outlook on life.  I hope that after all the trauma in her young life and the reconstructive surgeries to come, that Khalessi will find a loving home that she deserves.

This Pit Bull has Half a Face, and all the Love in the World Posted by Pitter Patter Paws at 10:44 AM No comments:

In a story that is making international headlines, a dog named Athena that was buried alive in France has been making a remarkable recovery.  French authorities found Athena's owner and  have charged him with animal cruelty, two years in prison and $33,000 in fines.  Which I think is absurd, he should rot in prison, but that's just me.  Anyway, to check on Athena's progress, click on the link below. 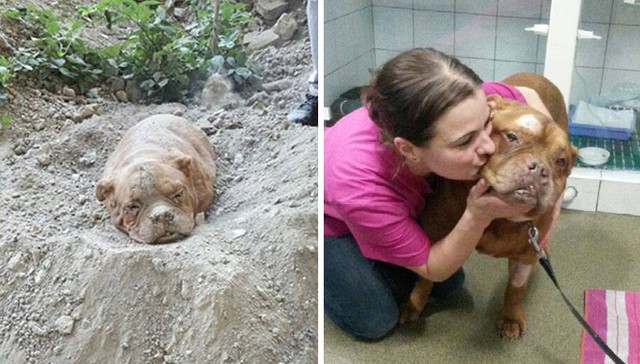 Posted by Pitter Patter Paws at 9:53 AM No comments:

It's a question all new puppy owners face.  Should they get another puppy to keep the other puppy company? Ahh, if only it was that easy! It may be a really tempting idea, but there are things to consider before making the big move.  Click on the link below to check the article out.

Should You Adopt Two Puppies at the Same Time?

Posted by Pitter Patter Paws at 9:30 AM No comments: